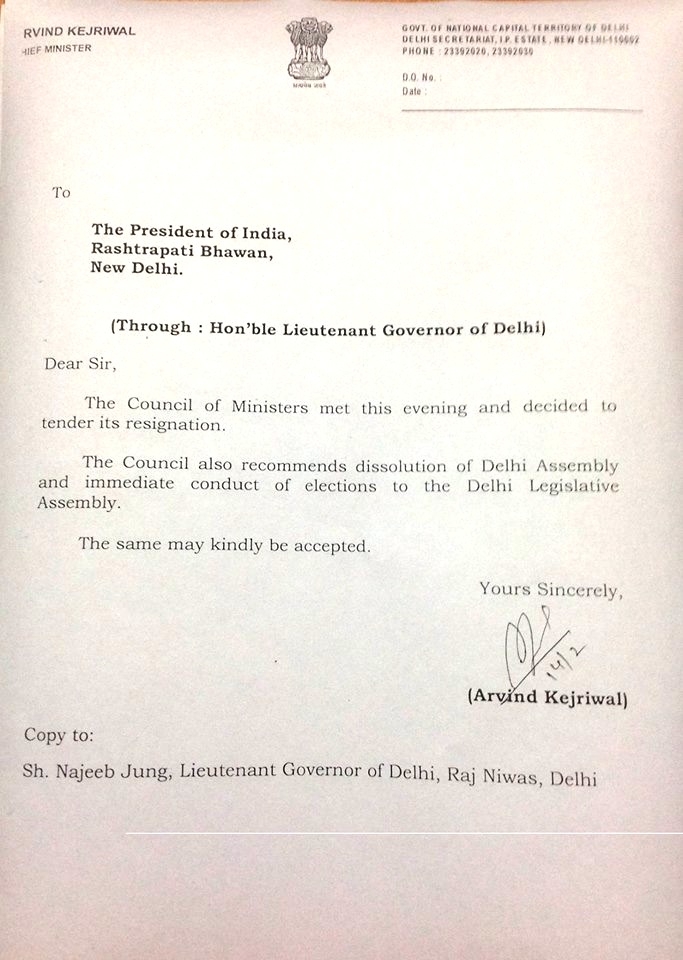 New Delhi:Friends, We gathered two months back. We came together on Dec 8 when the results of Delhi assembly elections were announced. I had spoken to everyone from this very window. We had won 28 seats and we were sure that we would form the government.Â

We had promised that we wouldn’t take the support of Congress or BJP but Congress forcefully gave us its support. We made the government only after consulting the public. We formed the government on Dec 28 and we took oath. Our biggest promise was that we would pass the Jan Lokpal bill. We would make strict laws against corruption.Â

But today, in the assembly, when we tried introducing the bill, both the Congress and the BJP got together. This hasn’t ever happened in the history of India. Everyone knew that Congress and BJP met behind veils and looted the country together but in the last two days, this game has been played out in front of everybody. Today the two parties did not even allow the bill to be introduced in the assembly.Â

Where does Modi get so much money from? He travels in helicopters. He organises such huge rallies. Money comes because Mukhesh Ambani backs him. As soon as we touched Mukesh Ambani, the two parties got together. They did not allow the Jan Lokpal because they thought that Kejriwal has a small anti-corruption bill now and he is creating so much trouble. If the Jan Lokpal bill gets passed, all politicians would land up in jail.Â

That is why the two patries got together and dropped the Jan Lokpal bill. They were also afraid that if the government goes on, it is only Ambani and Moily now but after a while even Sharad Pawar’s turn could come. Friends, I am a very small man. I am not here for the chair. I am here for the Jan Lokpal Bill. Today the Lokpal bill has been dropped and my government has resigned.Â

I request that Delhi assembly be dissolved and fresh polls be conducted. I am ready tpo sacrifice the Chief Minister’s chair a hundred times for Lokpal bill. I am ready to die for this bill. We have just had a cabinet meeting and we have decided that we will resign.Â

Since Dec 28, none of our seven ministers have slept properly. We have been working day and night. We have left no stone unturned for the people of Delhi. We have worked with honesty. It could be that we have made mistakes. We are human beings. But we have tried with full honesty.Â

These people say that we don’t know how to govern. In 5 years, BJP and Congress could not manage to audit Discoms but we got it done in just 5 days. We filed an FIR against Sheila Dikshit’s corruption. We filed an FIR against Mukesh Ambani. If we took crores of rupees and gave some to BJP and Congress, they would say that we are doing great work. Friends, whatever happened in the parliament yesterday has made my heart sour.

They used pepper spray in the parliament yesterday. They broke my microphone. They gave bangles to one of our ministers. They threw our papers. What does it mean to give bangles? Do they BJP wallahs not respect women? They say a lot of big things. They call the parliament a temple. But I ask, do they break idols in a temple? Do they tear the Quran in a mosque? I feel ashamed.Â

Is the central government that of the British and is Delhi’s Lt. Governor its Viceroy? We don’t want to listen to the Centre. We will only follow the constitution and are ready to sacrifice our lives for it. This nation wants to smell freedom now. People won’t stay quiet anymore. I am going straight to the Lt. Governor and I pray. We are very small people. I prayÂ